As I scroll through my Instagram, I am reminded that it is Spring Break 2k16! From beaches in Florida, to being a lazy bum at home, spring break is always a great time to have fun and be with friends. Luckily, I got to hang out with my friends in Tennessee. We had quite a few adventures along the way, but one adventure will be one that I won’t soon forget.
My friends and I stayed in a beautiful cabin nestled between the mountains. Being boys, we vowed to explore the mountains before our trip was over. On the second to last night, we realized that we had yet to explore. Despite it being midnight, my friend, Matthew, and I set out to climb the mountain that had been tempting us since the moment that we had arrived.
Let me tell you a little about this mountain. It was covered in green ivy, and was in no way supposed to be climbed. I was convinced that it was impossible, but Matthew would not settle for anything less that climbing that mountain. I told him he couldn’t. He took that as a challenge and before I knew it, Matthew was struggling up the side of the mountain. Our adventure had officially began!
He grabbed onto any trees, or shrubbery, that he could find and eventually found himself about 15 feet above me, standing on a tiny edge of the mountain. I congratulated him on his accomplishment, and asked how he was going to get down. He replied, “I’m not coming down. You are coming up!” I took that as a challenge, and began my assent.
After climbing about two feet, I realized that I was wearing Sperries. Boat shoes really aren’t conducive to climbing, and in that moment I realized that my climb was going to be even more challenging while trying to keep my shoes on my feet. I didn’t let that stop me. I would grab a hand full of ivy, and pull until I could find a safe place for my feet. It was a hard climb, but I was making progress.
About half way up, I looked back to see how far up I had climbed. Sadly, I hadn’t climbed nearly as far as I had hoped. Looking back, I noticed that there was a group of people gathered at the back door of their cabin, watching me and hoping that I was going to make a fool of myself. I could see the look of judgement on their face, and they could probably see the look of embarrassment on mine. I turned my attention back to my challenge, and continued to show everyone in attendance just how one should climb a mountain while wearing Sperries.
I reached the top of that mountain, although I had my doubts from the beginning. Matthew and I created some memories that night, and nothing will match the satisfaction we felt standing at the top and staring down on our resort. Life has a way of presenting us with mountains to climb. In evaluating them, we tend to doubt that we have the strength, or the tools, necessary to climb it. Do it anyway. Prove yourself wrong. You will thank yourself when you are admiring the beautiful view from the top.
Forever Imagining, 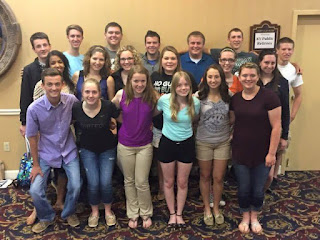