Over 300 FFA members had the opportunity to attend FIRE where they continued to develop their leadership skills, set goals, learn about Purdue's Agriculture Education program, explore service opportunities, and reflect on mentorship. The FIRE conference helped FFA members continue to fuel their passion for FFA and the State Officer team and I are excited to see members ignite action within their FFA chapters and communities. 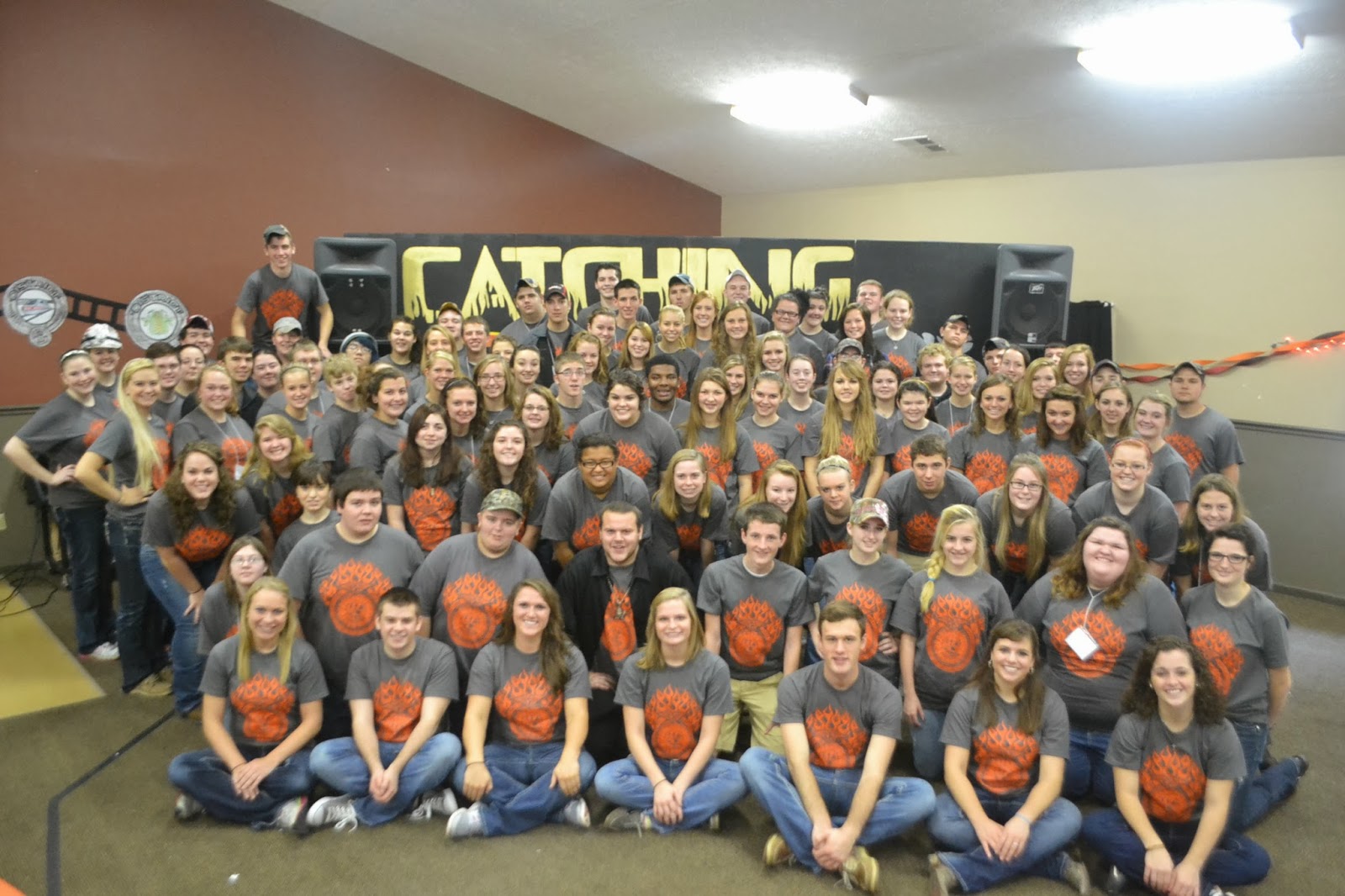 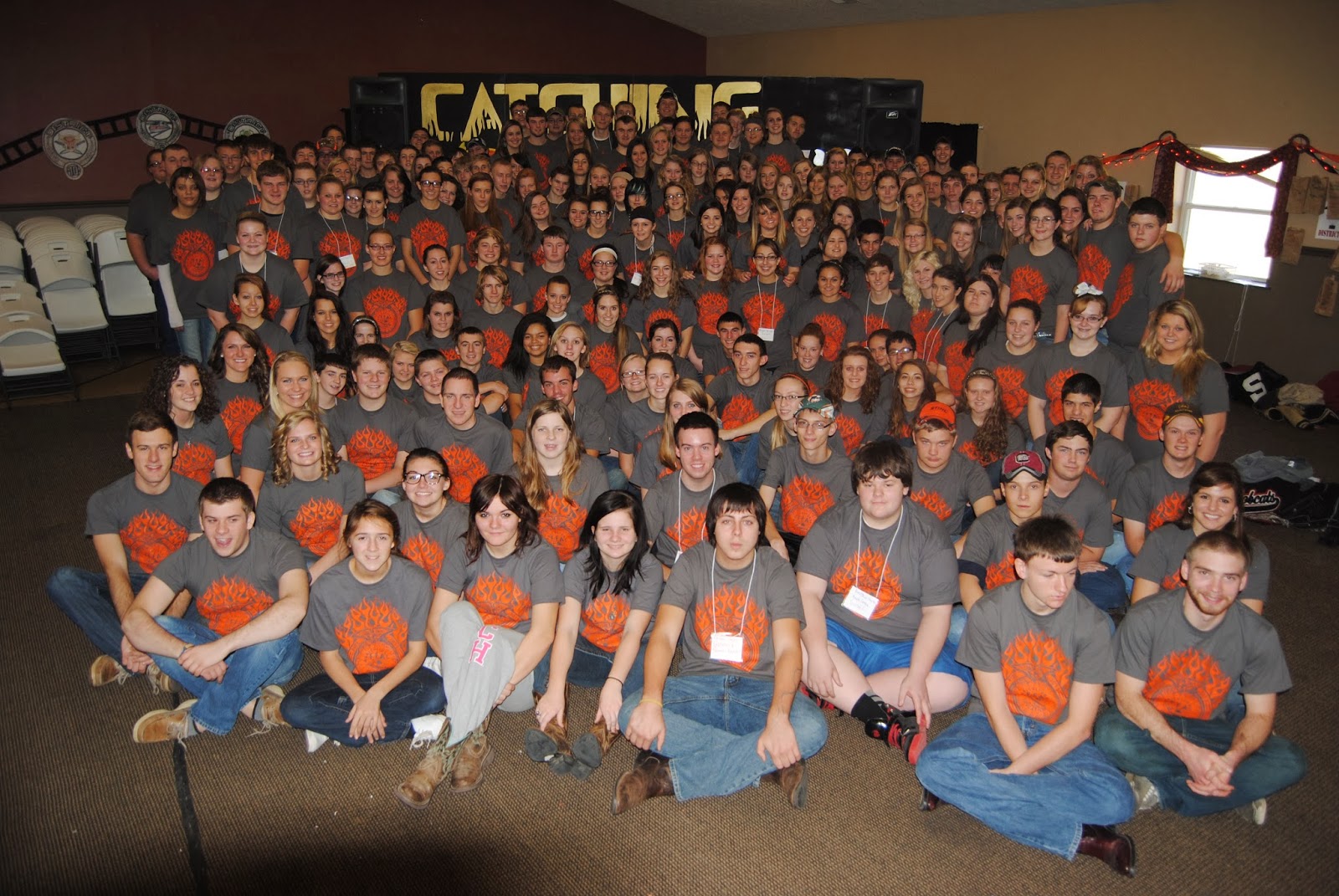 With two victorious weekends in the book, we cannot go without sending a huge thank you to our sponsors Ice Miller LLP and Farm World. Our conferences would not be possible without continual support from our partners!

The State Officer team and I will be back in action on Monday, kicking off our goodwill visits. Have a safe and wonderful Thanksgiving!

The Guys Across the Pond

Soon after arriving home from the 86th National FFA Convention, the Indiana FFA State Officer Team quickly began working on F.I.R.E. But on Sunday we had some familiar faces stop by unexpectedly they came in the form of Brian, Mitch, Steven, Wes, Jackson and Jason, the newly elected National FFA Officer Team. Instead of awkward handshakes they embraced us with hugs, immediately after we gave them a quick tour of the state officer house. Then, all 13 of us hung out in the living room talking about anything from Shelby’s fear of the dark to when we found out that the center is haunted during Kayla’s surprise birthday party. We could have talked for hours but “the guys” had to head back to the Fellowship Cabin on the other side of the Indiana FFA Leadership Center. 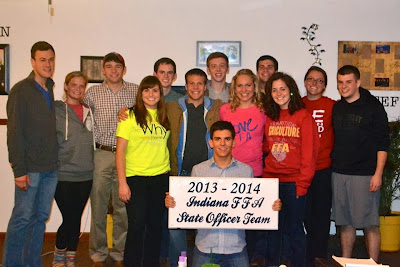 The next day as the National Officers were out to dinner, we decided to do some decorating for them. This came in the shape of steamers, saran wrap, foil, a strobe light for Cabin 4 (its haunted), giant orange street cones that we blocked several parts of the road off with and of course goody bags. You can say we were mighty proud of what we had just created. As they were heading back, we started phase two, paddling our sketchy old dock across the pond to the Fellowship Cabin. Our plan to scare them was a sad attempt. As they invited us in, we began to share with them what just happened. Then, showed them what we call the S.S. Seabass, In the midst of being outside at night, Mitch proceeded to run and I mean RUN away. We are still not sure where he went for the two hour span he was missing, but as he was missing the state officers, Wes, Steven, and Brian rowed the Seabass back to our house. Once back we chilled out in our office showing videos of us and Mr. Coty Back showing how he makes applesauce. We also once again chatted about anything and everything. Time shortly faded and they once again had to head back. 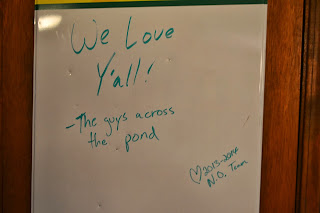 The 2013-2014 National Officer Team is a group of truly passionate and down to earth guys. If only there was more time in a day to hang out. We can’t wait to see what amazing things they do for this organization during their year of service. Thanks for the laughs and good memories.

So funny thing, Sarah just found a note from Mitch, a couple minuets before I was about to post. It said that he was waiting in our cleaning closet to scare us but mostly Shelby. The note was stuffed in our furnace in the cleaning closet. The mystery has been solved, thanks Mitch. I guess we should have paddled across the pond a little faster.

Posted by Indiana FFA at 6:17 PM No comments:

This morning, Kayla and I woke up early to go on a bike ride before our 9-5 PM office hours. With the time change that took effect last Sunday, after 5 PM it is just too dark to workout outside. After getting bored with doing YouTube video workouts in the middle of the living room, Kayla and I woke up a little earlier this morning, and by 7:30 AM we were on the road biking away. We left the Indiana FFA Leadership Center and rode our bikes around the block which totaled to be about 6.25 miles. It wasn’t until we hit the 3 mile marker as we were cruising down a hill that I realized how beautiful of a morning it was. I had never gone down the road we were taking and the leaves with the sun rising right over them was picturesque. Wow. Why hadn’t I realized how nice of a morning it was until then?

Maybe because my mind was thinking about my to-do list or about my family back at home or maybe just because I was solely thinking about crossing the “finish line” back at the center and have completed my workout. Sometimes in life we need to slow down and enjoy the ride. It is inevitable that life will get hectic and many things will weigh down on our mind, but there is no written rule that says we are not allowed to enjoy this crazy ride. Every once in a while slow down, enjoy the ride, and appreciate what is right in front of you. Don’t let work consume your life, and if it begins to look like it is… go on a nice walk or bike ride and just enjoy the ride.

Among the preparation for all the upcoming events, the state officers were able to take Friday and Saturday off to take a trip back down to Kentucky. The first stop was in Starlight, Indiana at Huber’s Winery. Huber’s Winery is the fourth largest attraction for agrirtourism in Indiana.  As a team, we were able to tour their facilities and try some of their delicious hot apple cider along the way.  Since no FFA trip is complete without some good food, we decided to stop for lunch before making our way down to Louisville.  We decided to stop and enjoy Jack Huber’s family style country home cooking which was right across the road from Huber’s Winery.  After a great meal and sharing many laughs it was time to continue our retreat onward to Louisville. 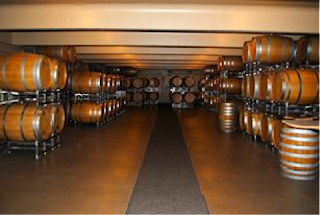 Once arriving, the team had the opportunity to go zip lining at the Mega Caverns in Louisville Kentucky.  We all had a blast zipping through the dark caves, even though, Shelby got stuck in the middle. 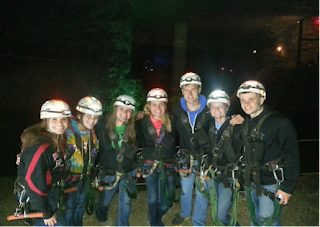 Concluding the excitement of zip lining the team headed back to the hotel to enjoy each other’s company and some Papa John’s pizza. The next morning was full of hair spray and fancy clothing as we all prepared ourselves for the two hour drive to Frenchburg, Kentucky. There we were fortunate enough to help our former assistant executive director, Coty Back, celebrate his wedding day.  After the “’I Dos” were shared, it was only appropriate that we celebrated with some good ole food and line dancing.  We were truly blessed to be a part of Coty and Nikki’s special day and we wish them a blessed future together. 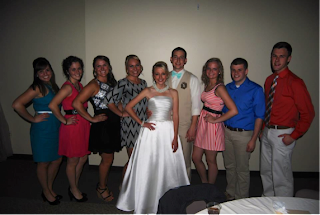 As the team and I prepare for another busy week, we look forward to spending the weekend with many Indiana FFA members for our first Foundations in Reaching Excellence Conference.

With Much Love,
Sarah Dirksen
Indiana FFA State Sentinel
Posted by Indiana FFA at 10:09 AM No comments:

Over the course of the last few months, life for my teammates and me has been bustling.  From early morning chapter visits to late nights working on LDW and Soar curriculum, we haven’t had a second to sit down and take a deep breath. 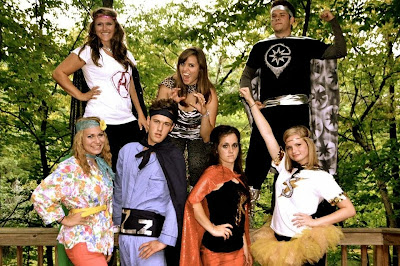 Just a little over a week after the Farm Progress Show, it was that time. Leadership Development Workshop #1! We all had a blast being superheros and empowering teams to take what they learned at camp home.  We focused on learning about service and getting involved in our communities. Whether I was presenting or eating lunch with members, I had an awesome time talking and laughing with members. 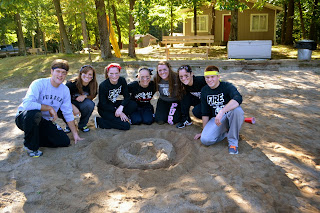 The weekend after LDW it was camp time again, and we were at Premier Leadership Training with all of the district officers, section directors, and band and chorus officers.  Jacob Mattox, Indiana’s National Officer candidate, was our facilitator for this conference. He did a great job teaching us about our leadership positions and giving us the opportunity to grow as a team.  I quickly realized how blessed we are to have such great leadership in this organization. 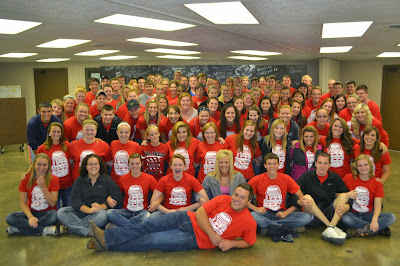 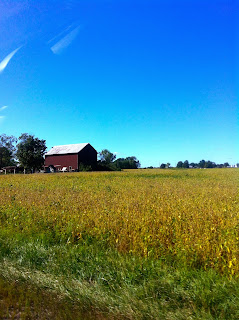 The very next day after PLT, it was time for our next mission. We started chapter visits and district kickoffs in District XII and moved on up the east side of the state for the first week.  I spent my time with Ethan that first week, and I experienced Southern Indiana for the first time.  I guess I neglected to understand the concept of a hill until Ethan was driving like a racecar driver over them.  You see, where I’m from hills don’t exist so this was quite the experience for me. We traveled through the beautiful downtown Madison, and we saw the tree in the gutter of the Greensburg courthouse.  For week two, I was with Kayla and the week went very similar to the first. We started in the south central District XI and finished in the north central District II.  We saw sights like Lake Monroe and ate at cute little hometown places like Netter’s Restaurant in Bremen. Then finally we started week three in District X. Sarah, Cameron and I took the final leg together.  We began the week down by the river and finished up in the good ole wind turbine country of District IV and District I.

Not only did we see the most beautiful Indiana sights, but we also met some of the most amazing people.  We watched chapter members grow closer through chapter visits and saw them come out of their shells in awkward situations at district kickoffs. We were very grateful for the families that welcomed us into their homes over those three weeks. 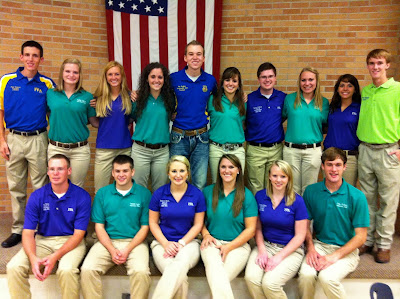 One short week after chapter visits, it was time for SOAR. We were all so excited to become astronauts, scientist, interns, air traffic controllers, and even an alien as we SOARed Out of this World! The 354 campers and counselors were pushed out of their comfort zones to make new friends and become awesome leaders. We all participated in activities like the low ropes course and creating a skit to put on for the whole conference.  I think it's safe to say that every member at the conference took something home with them, whether it was a new friendship or an impactive story. 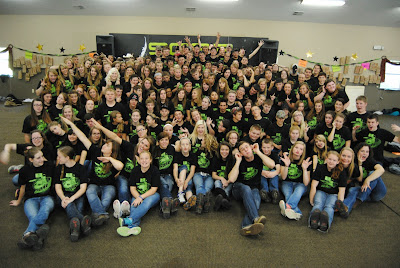 Then it was time to hit the road again and head south. We were Louisville, Kentucky bound! National Convention started on Monday, October 28th for the eight Indiana FFA delegates. The delegates included the seven state officers and Dakota Westphal, the District I President. On Monday we worked alongside other delegates for the Delegate Day of Service. We spent our time building boxes, sorting clothes, and setting up tables. Tuesday and Wednesday were spent building committee reports to help The National FFA Organization continue to excel. Thursday, Friday, and Saturday were spent in session after session. Every second of convention was hectic and amazing. Whether we were at the Dierks Bentley concert or watching retiring addresses, you could always find the state officers smiling. 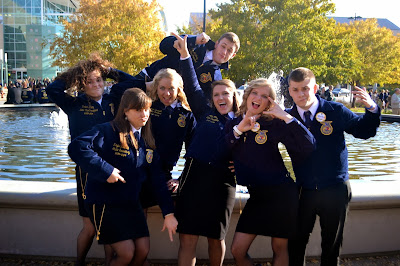 From getting up early to go to delegate sessions to falling down curbs heading in to a school for a chapter visit, every second of the last few months has been a blessing.  Thank you for being involved in all of those little seconds and smiling and laughing and making my days a little brighter. 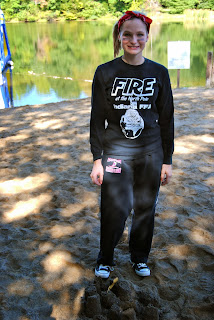