Stepping Outside of the Comfort Zone

For the past three weekends, our team has met so many members through our SOAR conference. Personally, it helped me to connect and form relationships with many of those people. I know one of my favorite parts was being able to get members to try a line dance or speak in front of the audience to answer a question. These things may have seemed small to others but they were big challenges for some.

We all are very aware of the words “comfort zone”. This idea is that anything that we would feel comfortable doing is inside of the zone. However, watching all of these members reach outside their comfort zone made me want to share my stories to encourage more people to challenge themselves.

One of the most prominent times I remember being tested to do some uncomfortable task would be public speaking. I know, it sounds crazy that a state officer would be afraid of talking to a large group of people. But, the truth is that it terrified me. I felt like everyone was judging every single word I said. The first time I was faced with this was initially running for state office. Being able to speak in front of mentors or other prep resources made me so nervous. It took a lot of stretching my comfort zone to even begin to stand in front of them. Then, to be honest, I was not very good at first.

Now, after being elected we have our first week of office which is considered base camp. I was relieved at the thought that I would not have to speak in front of people for quite some time (or so I thought). It was the last day of base camp when our facilitator asked for us to give some practice reflections. It honestly made me sick that now I had to be vulnerable and talk in front of some of the best people in the state (my teammates). Yes, I had done some speaking in rounds, but it was not done right with my teammates sitting a couple of feet away from me. My thoughts were spinning about whether they would wonder why I even got on the team or if the words that came out of my mouth would even make sense. My comfort zone had almost shrunk back down again.

To be really honest, I cried in front of my team that day. It was not because my story was really sad but I was scared of being a disappointment. There was no time to wait though so the timer started on my reflection and I began. Yes, I made it all the way through the speech. No, it was not perfect. But the point was that I made it through a speech in front of my teammates after also receiving critiques. None of those critiques were that I did an awful job or needed a ton of work. I was overthinking and was scared to step out of my comfort zone.

However, when I did step out of that zone, I realized that my teammates were here for me to be successful. That the other people around me in my life wanted me to do well also. This was one more scary thing that I accomplished. Now, I speak at conferences, chapter visits, and all other sorts of events.

The question is… What is making you a bit nervous, uncomfortable, or scared that you are doing? Go ahead and take the challenge head-on. There are people rooting for you to be successful. This is your challenge to step out of your comfort zone. I cannot wait to see you grow.

Stepping out of her comfort zone,

There are some mornings I wake up with a pit in my stomach. My heart starts racing. Somedays it feels like my skin is on fire. Thoughts start to creep in soon after. They start to flood my head almost as fast as the nauseousness. You see, these days come like waves. Sometimes they’re one right after the other, sometimes they arrive quickly.

With these feelings, came worries. Thoughts that I shouldn’t be here, that I will never be able to be the type of state officer that I needed to be. I don’t understand why I’m here. Now, that caused a completely different problem. You see, this created self deception that not only started to destroy me, but others.

Every morning when I’d wake up, finally pushing those feelings and thoughts aside, I’d try to be the best friend, officer, teammate that I could be. I’d focus so much on trying to get to what I thought everyone wanted me to be that I lost sight of who I actually was. I became indecisive, wanting to make sure everyone else was able to get what they wanted. I became burnout, just the idea of work sending a pit into my stomach because I couldn’t imagine doing anything less than perfect. I became bland, I was so focused on showing up as this shining individual that I actually lost what made me shine.

I felt like I was hiding behind fogged glass. It’s just foggy enough to blur the edges on who I am, but yet one wrong action could completely shatter whatever I had tried to create.

This whole realization happened after a conversation with my mom. She mentioned that the person who I was when I walked across the stage at graduation was not the same person that sat before her. She said that I was so focused on making everyone else happy, filling the thoughts and ideas that they seemingly put in my head.

That’s when it all made sense. I had created this false reality of who I needed to be. I had deceived myself into thinking that I had to be this, do this, think this, wear this, all so I could be someone.

This self deception won’t go away immediately, it's going to take time. In fact, for the first time since June, I woke up without a pit in my stomach. While that was a huge step in ridding myself of that deception, those thoughts were still there. It’s going to take time.

Untouchable. Faultless. Perfect. As a young FFA member, I believed that State Officers were larger than life. They seemed so aloof from my life. It appeared to me as if they lived on a pedestal. At the Leadership Development Workshop (LDW) Conference, it came to my attention that these very thoughts were running through the minds of some of those in attendance. One senior FFA member insisted that he could never see himself in the position of state office because he “was not good enough.” To him, the goal of state office just seemed intangible. This reveals the stigma surrounding the Indiana FFA State Officer program. This reveals the disconnect between state officers and members.

The reality behind state officers is simple and shocking: we are very imperfect humans. Just like everybody else. I do not spend all my time writing curriculum, speeches, or emails. I do not spend all of my time behind a computer. I live a simple teenage life; I am only 18. I play soccer when I’m bored. I watch Avatar: The Last Airbender and read Percy Jackson. I love my dairy cows. I go on long drives with the team. I will not hesitate to propose to someone in Walmart on a Tuesday night because I think that it is funny. I reference TikToks and am always on Snapchat. This is me. This is state office. Imperfect and human. 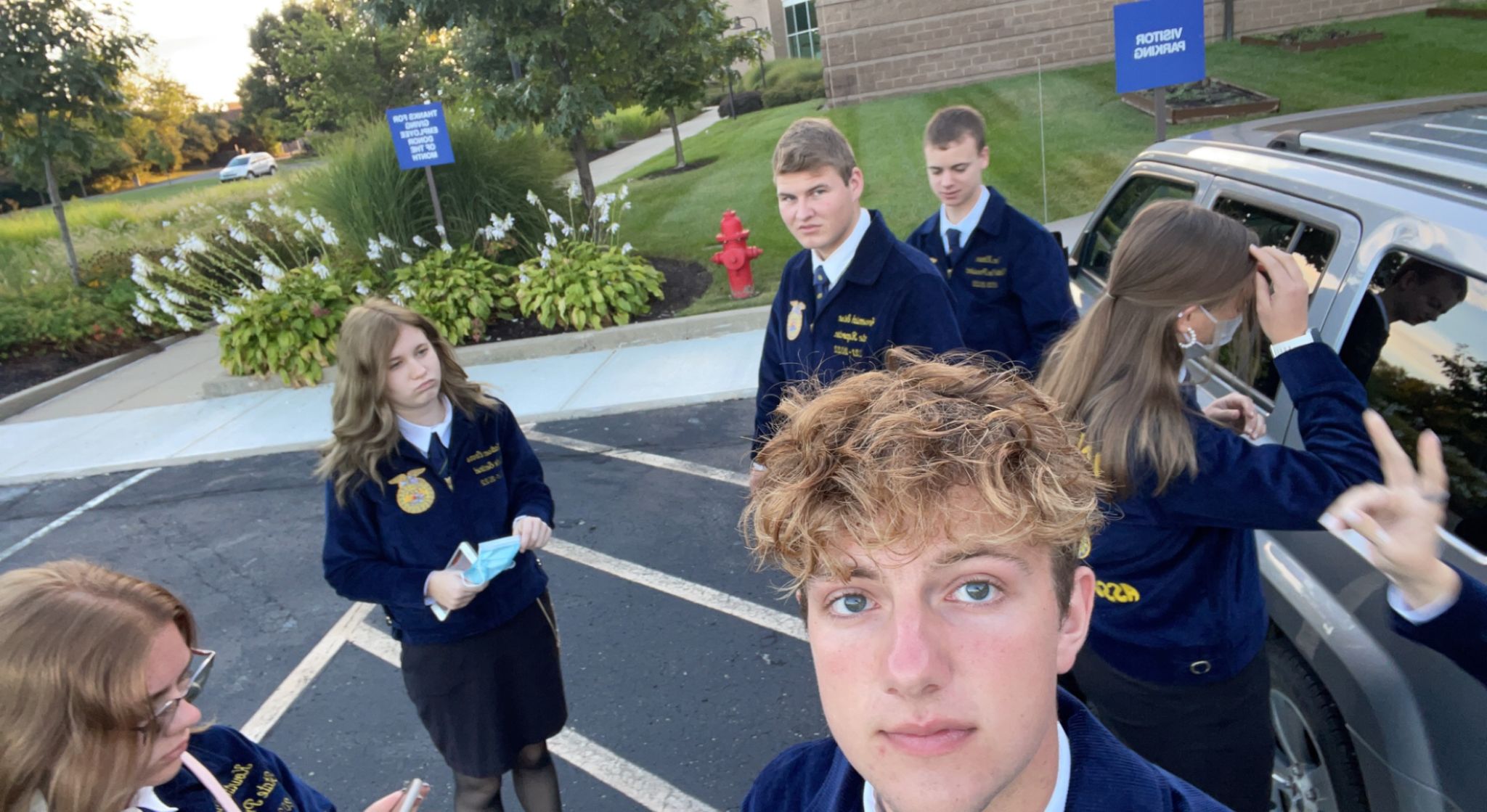 For those that are considering running for a chapter, district, section, or even state office, think about the expectations that you hold for yourself. Are you putting yourself on a pedestal? Are you creating a disconnect between yourself and the members that you pledged to serve? Are you falling into the “expectations” and the stigma of the office? If so, I challenge you to remain genuine and true to yourself. The best way to serve Indiana FFA and its membership is through heartfelt, genuine leadership.