The Words We Choose

“Rocco, slow down!”
Yeah, he’s not going to make it.
Flying past me on a slushy “More Difficult” run at Crystal Mountain, I had a good feeling that my youngest brother, Rocco, would bite the snow, hard, at the speed he was going. He would dive, dodge, and dip around skiers on their Sunday stroll, jump hills for more thrill, and face plant at the bottom of the ski lift.
“Morgan! Did you see that?” He would ask excitedly, ”I shredded the gnar, dude!”
My much more collected self responded, “Rocco Blaine, do you have any idea how fast you were going? How many innocent children you knocked out of the way?”
“Yeah! And it was awesome!”
While I was proud of Rocco for using “snowboarder lingo” to simply describe an awesome run, I instead debated whether to scold Rocco for being a snowboarding junkie. However, there was something different about his smile and his big blue eyes. As he anticipated my approval, I stopped to think about it.
Whatever I say, valid or invalid, kind or hurtful, it will affect him for the better or worse.
As a family, we make trips once a month in the wintertime to go skiing or boarding. We all have a lot of experience on the snow, but Rocco has never been one to master snowboarding even after countless lessons. There are many days of Rocco’s feet being binded to a snowboard, but this might have been his first day of making it down a hill without feeling angry and defeated, let alone without wiping out. On previous ski trips, Rocco would look towards his brothers to receive approval of how he boarded down after every run. Every fall would include a fit thrown and refusal to be alongside anyone as he developed the craft. His once bright, blue eyes, became dull from his lack of confidence.
It’s undeniable that so many individuals struggle with self-confidence or seek affirmation from others to feel accomplished. It can be hard to believe in one’s self in this day and age when so many image altering apps exist or how easy it is to eat an entire box of macaroni and cheese (unfortunately). There are many physical instances that affect our confidence, but nothing compares to the emotional words from someone dear to us. We’ve all experienced an instance of either receiving painful words or hurling them over walls at another. So often we can get caught in our emotions and use words without ever considering just how much they weigh on others. We can be quick to judge or be defensive, we can dismiss how others feel just because it doesn’t reflect our own feelings. But when was the last time we’ve thought for a moment on how the words we choose may affect them, positive or negative? When have we considered someone’s feelings over our own before choosing the words that will affect them? It can be a rare occurrence to choose our words, just as it may be difficult or easy to do. We can refrain from highlighting a negative by showcasing a positive. We can compliment instead of keeping our head down. We can be supportive in another’s pursuit for self-progress, just as we wish for their support in ours. It’s not always going to be beautiful, but it’s beautiful seeing someone gain just a little bit of that confidence back. The words we choose have the power to affect someone forever.
Rocco looked at me with a grin that covered his face.
“Rocco, you really did shred that. I’m proud of you, lets keep going.”
We loaded onto the ski lift and Rocco jittered with excitement. While he was trying to push the limits, Rocco pushed me to see just how we can impact someone with one simple sentence. It’s really up to us to choose whether that sentence gleams or dulls another’s bright eyes. 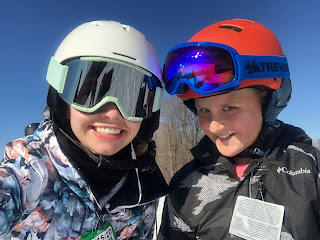 Morgan Hinz
Posted by Indiana FFA at 9:10 AM