Wild Adventures With the Team

Boy oh boy do I have a story for you.

It was a normal Tuesday afternoon at the Indiana FFA State officer house. We were all hard at work when SUDDENLY a large thud came from the glass door. Julia screamed.

We all ran to the kitchen to see what was wrong and there we saw it. A hawk hanging upside down from the screen door outside our house. The hawk fell off of the door and laid on our back deck.  What do we do?!? After calling a family friend, a DNR officer, we found a rescue sanctuary that would take the hawk. 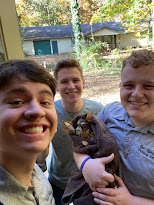 Now for our next problem… getting the hawk to the rescue center. Now don’t get me wrong I have done my fair share of chicken catching in my day, but a hawk? This one is a little different, and honestly a little nerve wracking. Luckily the hawk was still confused after running into the door so I was able to pick him up pretty quickly. Bird in hand, I walked into the lodge to find a box. Julia then brought us a cat carrier and we carefully got the hawk into the carrier and headed to the rescue center.

Now would be a good time to tell you that we decided to name the hawk Henry.

Evan, Julia, Derick, Henry and I piled into Evan's car and we were off to the raptor rescue. Halfway through the drive we had to readjust Henry so he wasn't sliding around in pain. Derick handed me the welding gloves. As I was trying to turn Henry he started to flap his wings and take off (let me remind you we were in the car.) Thankfully Henry was not strong enough to fly away yet so we were able to keep him down.

Twenty minutes later, we arrived at the raptor rescue and handed our boy Henry off to be treated. Since we were in Nashville we celebrated our good deed with a scoop of delicious ice cream.

The moral of the story is simple, do good deeds with good people and celebrate with ice cream.