The girls bathroom was filled with numerous aromas ranging from burning hair to perfume and hairspray. After the final piece of hair was in place, the make-up was touched up and Nathan finished whatever guys do when they get ready, we were camera-ready. Today was not just another day at the State Officer House, today was a day spent filming. 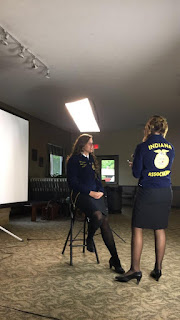 The day started with filming our parent recognition video and followed with filming a few commercials. Next, we found ourselves filming a commercial for PopSockets. We filmed various scenes including dropping our phones on our faces, attempting to prop our phone up on the salt shaker and even dropping our phone into the lake because we did not have a firm grip without an Indiana FFA PopSocket. We tried to be relatively logical and did not drop our actual phone into the lake and instead threw a phone case into the lake to stage dropping a phone. What we hadn’t planned for was the phone cases’ quick descent to the bottom of the lake.

Moments later we were faced with a decision. We could either forget the phone case, keep our camera ready look and have an afternoon full of productivity or change quickly and attempt to rescue the phone case. After a few seconds of pondering, Emily and I darted to our room, changed clothes and were back to the lake.

Now it was time to find the phone case. Luckily, we knew the general area where the case fell in and Logan had goggles so it would be challenging, but not impossible. I strapped on my goggles and descended to the bottom of the lake. I quickly realized that the goggles were not going to be much help when the lake water was cloudy. Nonetheless, I kept diving attempting to find Logan’s phone case. One time I was convinced I had it, but soon realized it was a misshapen branch. The quest continued, but unfortunately the case was nowhere to be found.

Emily and I could have spent hours pondering if we should get in the lake, but instead we chose to just jump in. Even if our chance at finding this case was pretty slim we decided to take the plunge. In life, there are often moments when we are apprehensive and may be nervous about the next opportunity. We might be afraid that the outcome will not be quite what we wanted. Let’s choose to just jump in. How or where we jump in may look a bit different. Maybe it is simply trying something new, stepping outside of our comfort zone or taking the jump to devote time to selflessly serve those around you. Take time this week to put your apprehensions and fears aside and simply jump in, because I know you will make a huge splash.