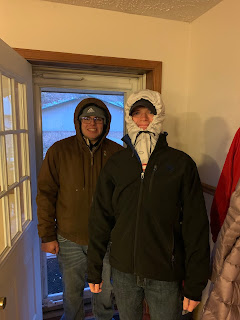 About the time we were walking down the lane of the FFA center, we had an idea. We decided to call Dillon and tell him we were giving up. As we got to our driveway, I called him to tell him we couldn’t make it. It wasn’t 10 seconds after we called that we saw him running out of the house to his car. Noah and I then hollered at him and laughed. But inside we were both really glad to know he cared so much about us. Not only was he so quick to come get us but he even had hot chocolate ready for us when we walked in. I realized a lot that day. I realized that I had so much fun talking to Noah for the three hours we spent on the road together. I realized how much my teammates cared for me when Dillon kept checking on us. I realized none of those awesome things would have happened if we would not have taken advantage of that spontaneous moment. I challenge you to be spontaneous and enjoy those moments.
Posted by Indiana FFA at 10:09 PM