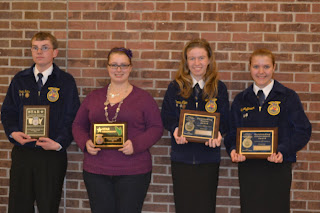 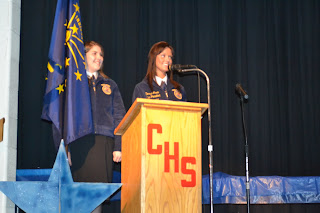 Upon getting elected as an Indiana FFA State Officer last June, my state officer team and I were immediately sat down with our superiors who then gave us a rough idea of what all we would be doing throughout the year.  It was immediately made clear to each of us that we would very rarely ever have a “typical day” as state officers.  Our calendar that was laid out before us for the next 365 days was packed!  As I studied the calendar, there was one thing that I personally really looked forward to the most, as much as anything else, even while others may have dreaded it most.  Two words:  Banquet Season.
Each year, beginning in the end of March and going clear into the month of June, FFA Chapters all across the state of Indiana start having their Chapter Awards Banquets.  If you have ever been to a FFA Chapter’s Awards Banquet, then you are more than likely familiar with how they are ran.  However, for those of you who have yet to have the opportunity to join a chapter for their banquet, you are missing out!  Typically, a Chapter Awards Banquet consists of a meal provided for the guests (free food!!!).  Then, they will begin handing out awards.  Awards typically are given out to all FFA members who participated in certain Career Development Events (CDE’s), or for certain scholarships, or for successful proficiencies, or even for having an outstanding reputation as an FFA member of that chapter.  Chapter banquets can be had in high school cafeterias, auditoriums, gyms, or even in a rented community building.  Each chapter banquet is unique.  Occasionally, an FFA Chapter will feature a keynote speaker during their banquet.  Typically, that keynote speaker is one of us seven Indiana FFA State Officers.
Throughout our year of service, we state officers will speak at at least 10-15 chapter banquets.  Of the 187 chapters across the state of Indiana, these are the chapters we (between the seven of us) have thus far had the opportunity to speak at:
Mt. Vernon @ MV, Kankakee, Scottsburg, Tri-County, Hoosier Hills, Tecumseh, Whitko, Springs Valley, West Noble, Blue River Valley, Lakeland, South Putnam, Owen Valley, Connersville, Columbus, North Harrison, Star Academy, Trinity Lutheran, Hamilton Southeastern, Madison, Danville, White River Valley, North Davies, Hagerstown, Whiteland, Heritage Hills, Whiteland, Southmont, East Central, Western Boone, South Decatur, Northeast Dubois, Seeger, Seymour, Orleans, Bellmont, Cloverdale, South Adams, Plymouth, Carroll @ Ft. Wayne, South Ripley, Crothersville, North Decatur, McCutcheon, Prairie Heights, Union City, Heritage, Columbia City, West Washington, Warsaw, Caston, Knightstown, Sheridan, Benton Central, Mt. Vernon @ Fortville.
Moreover, our year is not over yet!  We each still have about 5 banquets a piece we will be speaking at between now and when we retire as state officers in June.  I know that each and every banquet I have been to has held many memories that I will never loose.  I speak for the rest of my state officer team when I say we have truly been blessed and are so thankful to have had the experiences we have had this year.  For me, banquet season has been the “cherry on top.” 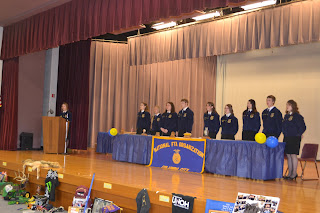 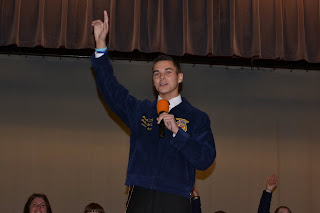