The Countdown is On... 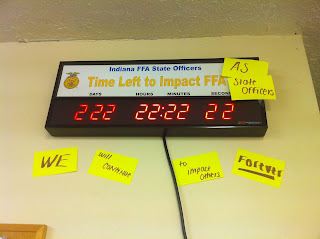 There is a clock on our wall in the state officer house that moves faster than any other clock I have ever watched.  It is the state convention countdown clock.  On the clock it says, “Indiana FFA State Officers, time left to impact FFA.”
This year has been an amazing journey! We have traveled all over the state, met so many great people, and made memories that will last a life time. We have one MAJOR event in front of us and that is the 82nd Indiana FFA State Convention. With our thirty remaining days we will be wrapping up session scripts, awards, sponsor recognition, speeches, workshops and other odds and ends for the state convention. State Convention will be our team’s final three days but it will be some of the best three days for one major reason, we get to pass it on…the memories, traveling adventures, great people and the opportunity to make a difference to the new state officer team that will be elected at state convention.
One day my team decided to tape a couple note cards on the wall right underneath the clock. The clock now reads, “Indiana FFA State Officers, time left to impact FFA…as state officers. We will continue to impact others forever.”
Posted by Indiana FFA at 4:49 PM